The International Union for Conservation of Nature (IUCN) is the world’s oldest and largest global environmental organization.  It maintains a Red List of Threatened Species that is designed to determine the relative risk of extinction, catalogue and highlight those plants and animals that are facing a higher risk of global extinction (i.e. those listed as Critically Endangered, Endangered and Vulnerable).

Getting listed is a complex process - so complex they offer Red List training!  Suffice it to say, though an extremely useful guide to the world's most endangered animals, it is not determinative of a species status. There are many more threatened species than those presently listed on the Red List.  To identify Australia's most threatened animals and plants, therefore, it is more helpful to refer to State and Federal Legislation...

In Australia, endangered species of plants and animals are listed under the  Environment Protection and Biodiversity Conservation Act 1999 (EPBC Act) (Commonwealth)  and/or under individual State legislation. For a complete list of all animal and plant species currently listed under the EPBC Act, click here*.


Australian bird species (excluding sub-species) listed as at May 2014 are set out below. If you click on the scientific name, it will take you to the government website which details all relevant information, including location, state legislation and recovery plans (if any), in place for that species. 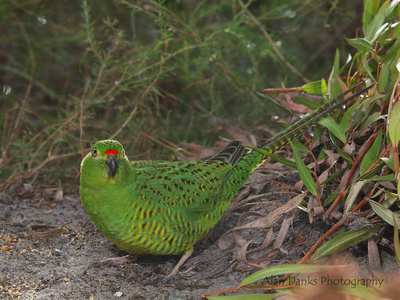 Western Ground Parrot: one of only 7 birds in captivity in the world. The wild population is estimated to be as low as 110-140 birds. You can help - go to www.western-ground-parrot.org.au

* Note: as you would expect, getting a species listed under the EPBC Act is also no easy task - and can take several years. For instance, the application to upgrade the Western Ground Parrot's listing to critically endangered took several years. New nominations for species and ecological communities will be assessed by the Threatened Species Scientific Committee according to the criteria for the new categories and listed accordingly. Therefore, when referring to species listed under this legislation, bear in mind that there are likely to be other threatened species deserving of listing or uplisting, but have yet to pass through the scientific, empirical and/or bureaucratic hurdles.